The paintings of the cathedral 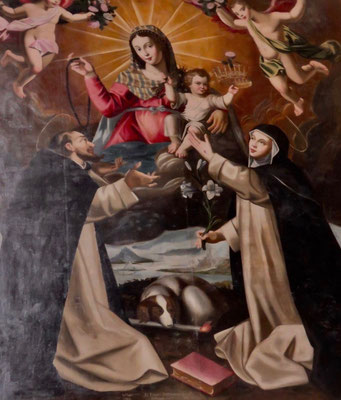 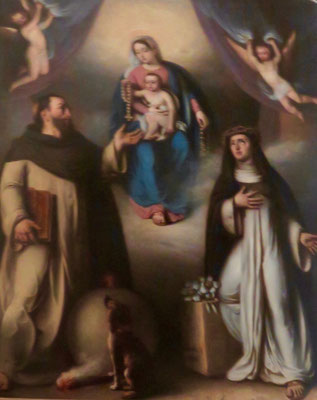 St. Dominic founded the order of the Dominicans in 1214, according to the rule of St. Augustine. Tradition reports that it was during an apparition that the Virgin recommended the practice of reciting the Rosary.

St. Catherine of Siena was born in 1347, in Tuscany, at the time of the popes of Avignon; she entered the Dominican order. It was a mystic who dictated spiritual advice. She even went to meet Pope Gregory XI to convince him to return to Rome. This one, Pierre Roger de Beaufort was not unknown to Vivarois since he had been canon to Viviers.

In 1625 it was the foundation of the convent of the Sisters of Saint Dominic sent by the Jacobin Fathers (another name of the Dominicans) of Puy.

By visiting the cathedral, two almost identical paintings depict the Virgin holding a rosary with these two kneeling figures: Saint Dominic and Saint Catherine of Siena.

The first, against the western wall of the nave, on the left is the work of Jean-Baptiste de Hault, Dominican Lorrain and dates from 1635. It is the Virgin who gives a rosary to St. Dominic.

The second, in the nave, first right span is the work of Claude Soulary, a native of Lyon, 1836. It is the Child Jesus who tends the rosary.

These paintings evoke the holy personages in connection with the existence of Our Lady of the Rhone and bear a similar title: the Rosary.

But why is a dog represented by the two painters? A curious legend says that the mother of St Dominic would have dreamed "that she gave birth to a dog holding in her mouth a flaming torch with which it burned the whole world" Also the dog carrying torch became the symbol of the order Dominicans he founded.